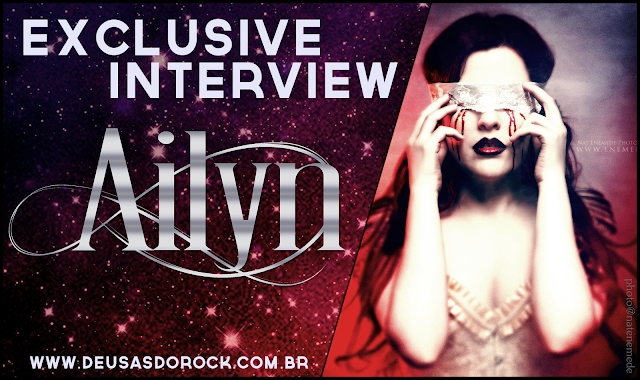 First, it is always an honor to speak to someone which we identify and feel very deeply what  your music says. Thank you for your time and for the interview, it's really a great pleasure!

Thank you! The pleasure it is mine!

When did you decide you wanted to make music your profession and what were your influences?
I started singing at the school when I was 11 years old, but even I was just a child I was pretty sure that I wanted to be a singer, so when I was 14 years old my mom decided to take me to a music school. It's a bit difficult to mention just one, there's too many musicians that inspire me since I started singing ultill now, so it wouldn't be fair just to mention a few of them.

Who else encouraged you in your career?
My mom and my sister, they always has been there from the begining.

What is the importance of music as a whole in your life?
Well as many of you know, I have some health issues. And music has been always what it kept me moving forward. Music is what makes me have a big smile on my face even on difficult times and giving me the strenght I need to do things and keep going everyday and fight for what I want.

About Sirenia, how was your experience with the band throughout all this time?  Did you participate of the creation process?
The experience was very intense. During all this years I experience many things and also met many people around the world...
No, Morten (Veland) is the one creating and deciding everything on the band. For the creation process I just got a demo with the vocal melody I had to sing recorded by a guitar and then the lyrics, so I just had to study my lines. When I was learning new songs, I tryed some new ideas and I always told morten about them, but he likes to do his music on the way he wants so some times I could change things that made me sound (in my opinion) better, but not always...

How the departure from the band reflected in your life?
Actually it didn't change too much, I keep working in the same place, I still do the same things I did before and I'm still living in Norway. The only thing being different in my life is that before I was the lead singer on the band and I thought I had some "friends", but now that I'm not in the band I don't have this friendship anymore. 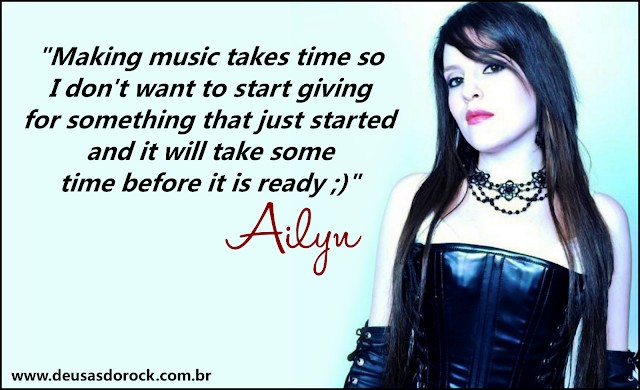 We are all very anxious to know your future plans. Can you give us a clue?
Well for now nothing is clear, but I'm going to keep working on music, that's for sure. Right now I'm working on some things, but I think it's too early to talk about it. Making music takes time so I don't want to start giving hope for something that just started and it will take some time before it is ready ;)

In your opinion, what are the biggest challenges that female singers face in the metal scene?
I'm not sure, maybe is to make some people understand doesn't matter if you are man or a woman. We are all equal and music made by a female singer/musician can be the same good as music made by a man, but sadly many times people don't see beyond the way you look. I know many female singers making their own music and doing the same excellent job as any other musician.
When you came to Brazil, what did you think of the fans and our country?
I think you guys are amazing. The times I've been in Brazil everyone has been very kind and showed me a lot of love. I love the way you feel the shows, you guys very entusiastic and I loved it. I'm really looking forward to go back someday <3 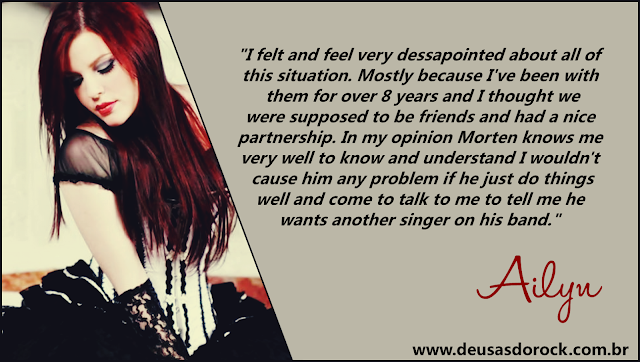 How do you feel about the band’s attitude, asking you to leave at difficult time? Do you still have contact with them? Is there any resentment?
Well I just have contact with Jonathan, he told me he knew I was being kicked out when the decision was taken, so he wasn't part of it either. Being honest, I don't feel any resentment but as you can imagine I felt and feel very dessapointed about all of this situation. Mostly because I've been with them for over 8 years and I thought we were supposed to be friends and had a nice partnership. In my opinion Morten knows me very well to know and understand I wouldn't cause him any problem if he just do things well and come to talk to me to tell me he wants another singer on his band. It could have been so easy as that. I never hide to anyone about my health issues, the band knew, everyone knew from the beggining about it, so for me getting a phonecall from him saying I'm out of the band because he thinks I'm too sick and I can't sing was very dissapointing. First of all because I'm the one living with my illness and the day I think I'm too sick for singing, be sure I'll be the first one stoping my singing career. He can decide when a singer should leave his band, he is the boss so he have all the right to do it, but he is not aloud to decide when someone have to stop her singing career as he intended, he never asked me, he just decided for me... I always knew I would be singing with them as long he wanted me to be there, so being out it's ok for me, actually I knew this would happen sooner or later. I don't want to have a war and I don't want to start arguing with them to show who is right or who is not, but I just want to leave something clear. When he published the statement on their page saying Sirenia and I part ways for personal reasons, I told him to not publish it cause I wouldn't stand behind the statement cause it wasn't true, so when he did, the only thing I did is to say on my statement I was not part of this decission and I standed on a side and didn't talk about it on my pages cause I didn't want to make a big problem of it. But I think is very cruel and desapointing that after how he did things, I have to see everywhere how they are saying once and again it was my own decision to leave, because of health problems or personal reasons. I guess if they don't want to say they kicked me out on a very bad moment of my life and without a previous talk cause that would make them look quite bad, they could just say they don't want to talk about it and focus on their "new era". With their statement and their comments they kind of made people think I'm super sick and dying so I got and still getting a huge amounth of messages from everyone being very worried about my health and sending lots of love and good wishes for my recovery. So I just want to thank you all for all the love and just let you know I'm fine. If I'm feeling worse than before this days it's normal, to loose a parent is not easy and it's a wound that will not heal so easy.

How was the partnership with the band Enemy of Reality?
It was great! They are amazing people and very friendly so it was a pleasure working with them :). I also met them few more times during some shows and is always nice to have some time to spend with them.

Would you like to do a duet with some other singer of symphonic metal?
Yes, of course, I have a favorite one that always mention in all my interviews and as you all know I'm not mention it cause I'm repeating myself haha, but there are also so many other band and singers I would love to work with.

On the X-Factor Spain, you sang “Bring Me To Life” from Evanescence. Are you a fan of the band?
Yes, I do. Actually on  the XFactor my coach asked me to write a list with songs and artists I like. And from my list I gave him the only name I think it sounded more familiar for everyone working that show was Evanescence and is why they choose that song for me. I really like Amy Lee, I think she is a great singer and artist and her music is very cool. Her voice is very emotional and makes me feel what she sings and that's something I really love from her.

I wonder if you intend to go on a solo career or if there is an interest to get in a band?
Well for sure I'm going to keep working with music but for now I'm not in a hurry. I want to make something good. It would be very easy to make something fast now so people can see I can keep going without sirenia, but I always thought making good things requires time, so I'm going to take the time it gets to do something I'm happy and proud of. I still don't know if I'm going on a solo career or a band, we'll see ;)

You participated in the Metal Female Voices Fest with Leaves' Eyes in 2014 singing "Into Your Light" song. And Liv recently left the band. What do you think about this? Did you follow the rebound?
Well I read about this some time after it happens and being honest I can't give my opinion, as I don't know what was the problem that makes them go separate ways. I didn't ask Liv or the guys what happened cause that's not my bussiness, so I really don't know what to say.
Ok, let’s change the focus of the interview a little bit ...

What are your main skin and hair care?
For my skin I just use cream in the mornings and before going to bed, and for the hair I use some conditionair when I wash my hair and that's all. 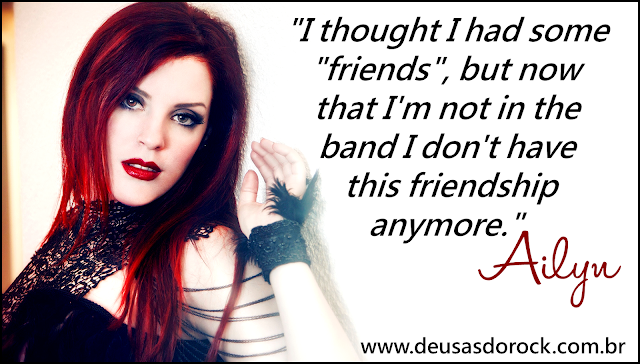 When you're on the road, what are the most important items to carry in your bag?
A book and music!

What is your favorite social network? (We love your Instagram!)
Thanks!! Well I'm not a big fan of networks, I guess you have notice I normally don't publish much things, but for now I think Instagram is the one I like best, its easy and doesn't require me a lot of time :) 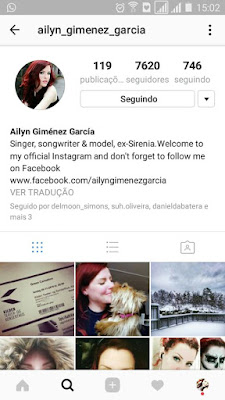 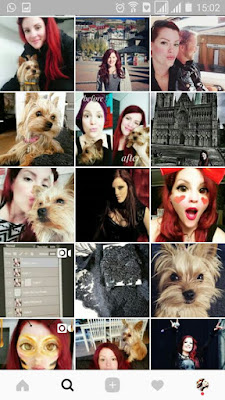 Finally, we would like very much that you leave a message to your fans, not only from Brazil but from all over the world.
Thank you everyone for all your support, your sweet words and for being there all the time. I hope it will not take to long until I can meet you all on the road.