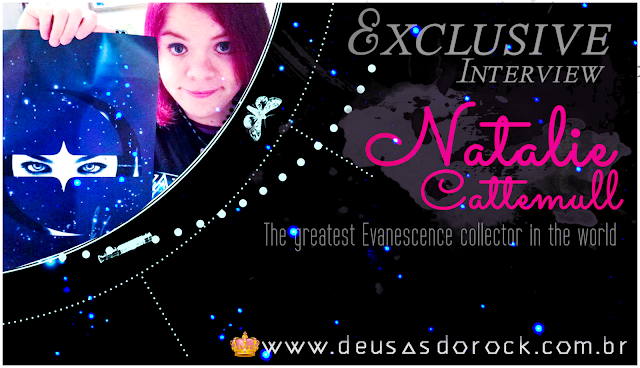 It is always good to have a chance to meet and connect with new people who really have something in common to add to our lives. It was like that with me when I met Nat's collection. I soon wondered who was the person who possessed so many treasures on this beautiful internet of God. Nice and cute, she tells us a little about her collector trajectory and many curiosities. ~ And a basic controversy with the single of Lacrymosa ~ We are those! Check out this wonderful interview and be fascinated with so many precious things!


How did you get to know Evanescence and what caught your eye the moment you became a fan?
I first discovered Evanescence in 2003 whilst watching the music channels on the TV, the video for Bring me to life came on and i found i stopped what i was doing and sat through the entire video not saying a word and was totally mesmerised by not only the fantastic video but the lyrics of the song, thats what drew me in. From there my love for Evanescence’s lyrics in their songs hasn’t changed and I find a different connection with each different song from every album. 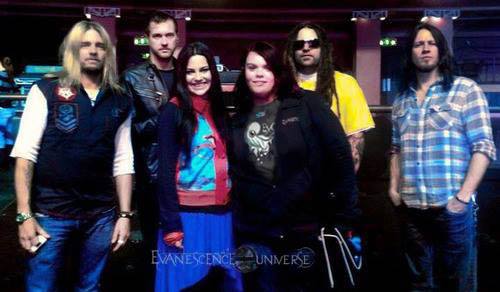 How long have you been collecting the band's itens and what was your first item?
I started collecting not long after first watching the bring me to life video in 2003 and my first item/s where brought the next day went i went into my local shop and brought the Bring me to life CD single and limited edition dvd single, not long after that the album Fallen was released and i brought my first ever copy on the day of release. 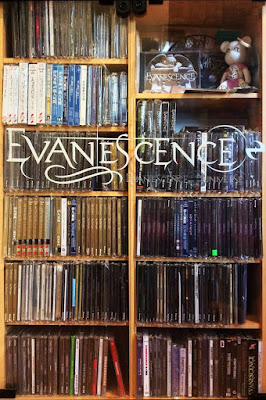 You are a great collector, but you remain with a certain discretion. How big is your collection?
Thats such a lovely thing to here and i am so appreciative of all the nice comments i receive about my collection as its one of my big passions in life. (A special page on Evanescence Universe known as the ev pin board has been added for all the nice comments i receive!) Im quite a down to earth person and so yes i do tend not to “show off” as i don’t feel the need to and thats not my personality. I’d like to think that i can just share my passion without being big headed about anything as again thats not my style and i have a very positive outlook on life that means i respect and appreciate everything i have or I’m given as a blessing. And i also enjoy seeing other peoples collections growing.
My official collection website Evanescence Universe is only a few years old and was created from my original Tumble page: my evanescence octopia as my way of showing and documenting what i have in my collection online. My Official collection site Evanescence Universe is currently under renovation with new and improved upgrades for 2017, but don’t worry it will remain open to the public to view throughout the upcoming changes. As for my tumblr page It will remain a page for me to share and like others evanescence/amy lee posts but my collection pages will be taken down from my tumblr account, so the only way to view my collection will be on Evanescence Universe.
Link : http://evanescenceuniverse.wixsite.com/my-ev-collection
I also have a Twitter and a Instagram page all under the name of Evanescence Universe, where i post any new merchandise i buy or get given as gifts.
My collection i own overall is extremely large but i have not yet counted exactly how many cds,dvds,vinyls and other merch etc as i also have cds out of there cases (spares if you like) that are not on Evanescence Universe as yet. I imagine it might take me several days or even weeks to achieve this and simple do not have the time to do it, and after all these long years it has defiantly become an extremely big collection. 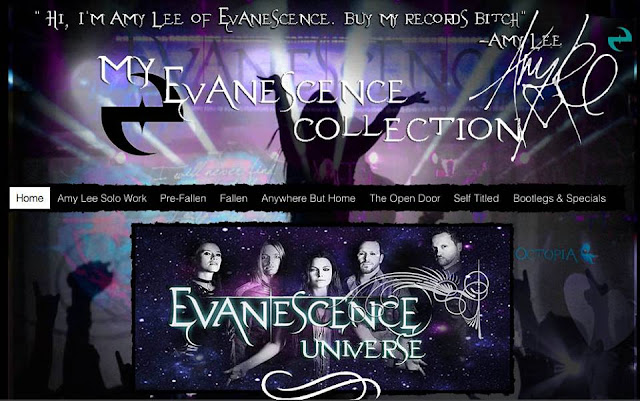 Has it taken you so long to get where you are as a collector?
Well yes as i started in 2003 and we are now in 2017 thats 14 years of collecting and being a fan so thats a really long time to gather a huge amount of Evanescence items :D
Of all items:

What is your favorite 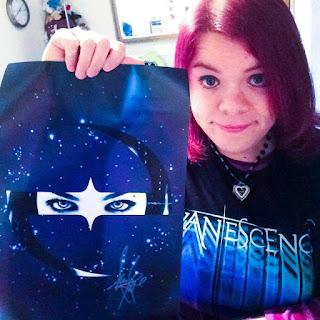 Hmmm now thats always a tough question to answer as i love all of my items in my collection but if i had to pick a few (impossible to pick only one!) I would have to say the items i got signed when i met the band in 2011 at a meet and greet, ( see images meet and greet UP & Itens ) they hold a special place in my collection as it was a day i will never forget. Also my fiancé got a working pass from the manger of Wembley Arena after the 2012 concert in London, so that is another rare and unique item.
My newest Signed Amy Lee Ultimate Collection poster that was sent out as an apology for the delay in shipping the Ultimate Collection boxset Is another one of my gems as these are the kind of items that are few in numbers and more special. My rare cds are also another favourite of mine and of course i love my Evanescence Glass door cabinet that my cd collection is displayed in as i made and designed this myself and is a unique item to my collection that makes my collection stand out and everyone knows that cabinet belongs with my collection so its like a trademark of Evanescence Universe and widely recognised. 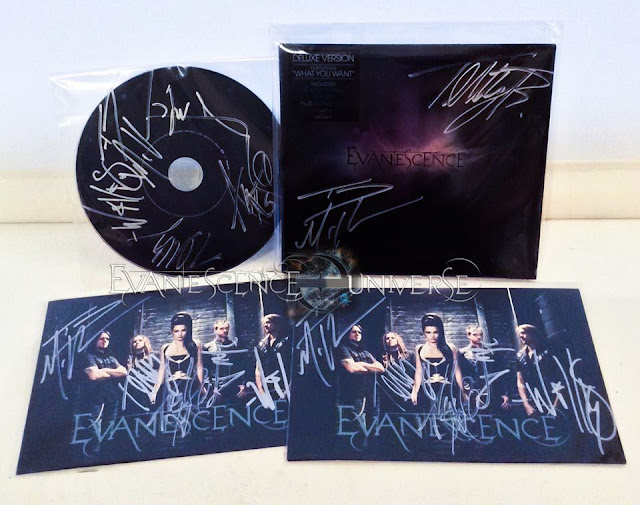 Which is the rarest
My Imaginary single, Evanescence Ep and Sound Asleep cd’s and my Origin album. All of these were brought before they became impossible to get hold of and so i didn’t pay that much for them but now they are rare and the value has skyrocketed so I’m blessed to have them in my collection. 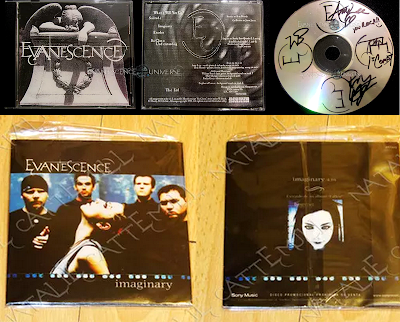 Which is the most expensive
Imaginary single, Evanescence Ep and Sound Asleep

How do you identify and catalog your items?
Most items can be identified by catalogue numbers and also on the back most do have a country of origin others take more research but after all these years i can recognise most countries and the way they package there cds/dvds


Are there any items left to complete your collection?
Hmmm I hope not then where's the fun lol No I don't think my collection will ever be fully complete as I collect albums from different countries so I'm always on the lookout, but as for things like promo CDs etc then yes they are complete but again I have different versions of even them from different countries around the world so my collection is ongoing and if Evanescence release another album ( fingers crossed) then the fun begins again in collecting all the different versions of that album. 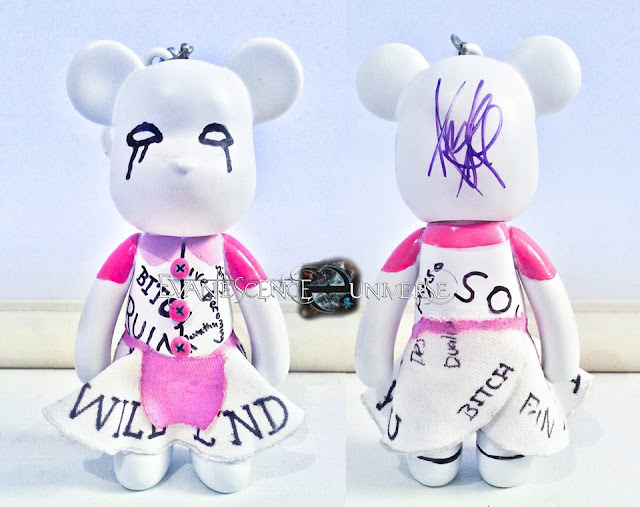 Some time ago, a boy came up with a single from Lacrymosa (I may be wrong, but until then, the song was not a single and had no press in the media), you as the biggest collector in the world, in your opinion, is Rare or is it fake?
Yes i have seen these and will most likely buy one at some point just to have it as a novelty piece but yes these are fake as lacymosa was never official released as a single, i can’t comment too much on it rarity as it is a bootleg copy but still whoever made it i think did quite a nice job. 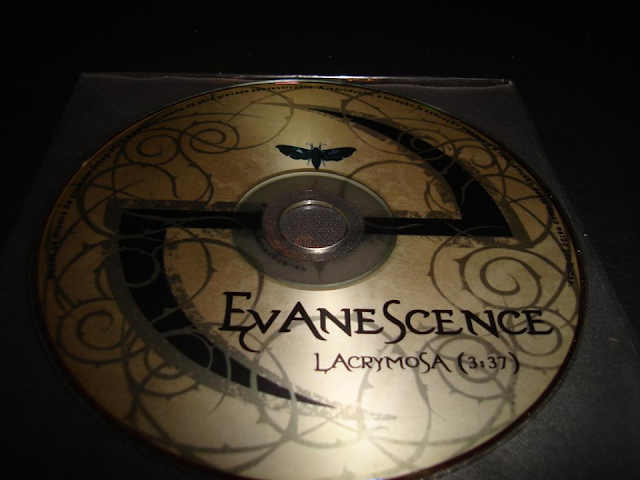 I always wanted to ask you this question: about Ben's exit, what's your opinion?

Well i know within some quarters of the Evanescence fanbase Ben can be hated but i don’t really do hating others, I’m more about good karma and respecting others and their lives but i think that people change and Amy and Ben where only kids when they met and often friends do drift apart when they get older and other things in life happen, and really i don’t think the band suffered tremendously as look were in 2017 and the band is still touring with a possibility of a new album, not to mention the release of the Ultimate Collection Vinyl Boxset.

About Amy's solo work, which song do you like best?
I do like her cover work Album and have it on my iTunes but i also unashamedly enjoyed her kids album especially the track “I’m Not Tired“ as it makes me smile when i hear it and the song tends to get stuck in my head.

Tell me a crazy story in your life as a collector ...
Oh i have had many strange experiences since I’ve been collecting, I had a stalker once on Evclub (the official fan club of Evanescence) that not only did they copy my Evanescence collection but also then tried to copy/impersonate me as a individual, that at first I found flattering but as the years went on found i was quite sad for her not been happy being herself and I was obviously someone she wanted to aspire to be, but it did become crazy and creepy for me lol but thankfully i think she has given up !

How do you recognize if an item is fake?
There are various ways of telling for example the quality of the artwork on the cd or merchandise but I collect official and non official (fake) items so i don’t really mind to much if i buy bootlegs or unofficial items all is welcome in my collection.

Your social networks are beautiful and your site is wonderful! We can see that you put a lot of love and dedication in every little bit! What else does work keep?
When I had made the decision that i was going to make my collection public to view, the hardest part was doing the initial load of photography of my entire collection as that was a mammoth task and then having to organise it and upload it all. Im currently updating the images on my site so I’m doing to process again but with clearer images and making the site look better. As for the up keep of my social media sites thats not too bad i try and update my site when i have new items and when i have the time either at the weekends or in the evenings but I try to fit it around my life/work as best i can and with this new 2017 update I’ve added more workload to it but I’m taking my time and trying to do each section one by one gradually overhauling the site. 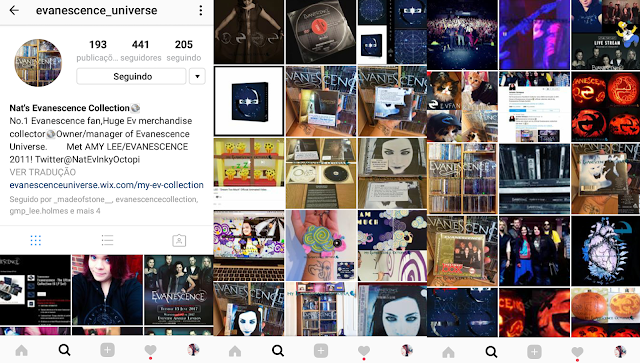 What is your advice to anyone who wants to become a collector?
Always research the item your going to buy to make sure your not going to be overcharged or buying a product that isn’t what it says it is, Research is a good tool to have but experience gained from years of collecting is priceless so just keep collecting the things that you like rather than what other people think you should have in your collection and enjoy gathering up all the Evanescence goodies. 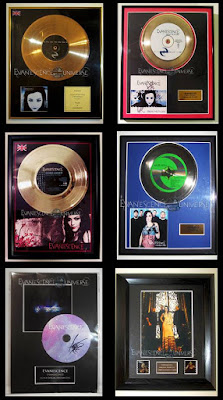 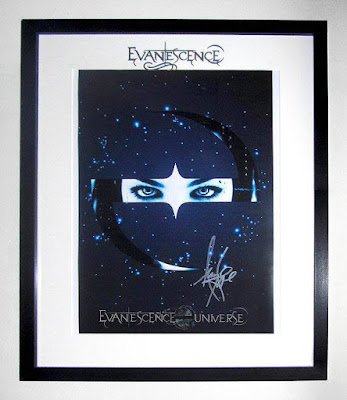 Thank you for the honor! Use this space to leave a message for all Evanescence fans!
Well i would say to All Evanescence fans just keep enjoying the music and lyrics and any concerts that they are lucky enough to get to go and see, and support one another don’t hate. Life is too short so enjoy everything Evanescence lol ! And thank you and everyone who follows my sites your all very much appreciated.