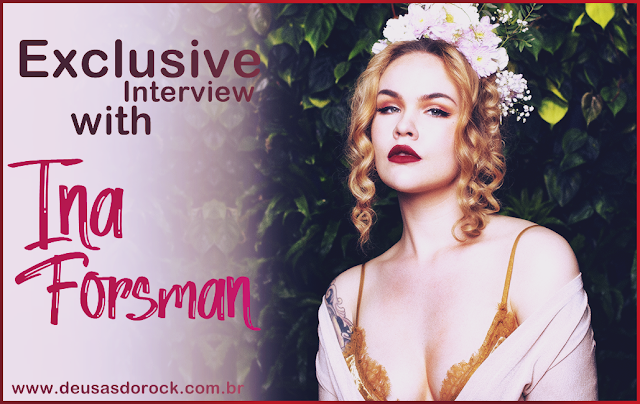 
Do you know when you find yourself between the sun and the rain, the sanity and the daydreams and you urgently need a rope to pull you from the hole you are in? Ina Forsman's unique and striking voice was exactly the chord that woke me up from my private nightmare. Having the opportunity to talk, interview and most importantly: listen to what she has to say, was what drove me when I was in a very dark moment of my life. I can heartily tell her that everything is now "All Good". Check out the interview with someone who can really shiver your soul:

First, thanks for the opportunity. It's a great honor to be able to do an interview with an artist I admire from the first moment I listened to your (so intense) songs on Spotify. When was the moment in your life when you decided to become a professional singer? And what made jazz and blues necessarily impactful to make it happen?

I was 6-years old when I first said that I want to become a singer when I grow up. Through my childhood and teenage years I practised alone in my room, singing to pop songs of that time. When I turned 16 I started to look out for more older music like Aretha Franklin and Etta James and never went back. I am deeply in love with soulfull music and I find it best in Jazz, Blues and Soul music. This is also the kind of music I want to create myself, music that makes people feel.

His voice is unique and frighteningly extraordinary. I confess that I was surprised by the size of the talent inside your face of angel lol! Are people still surprised when you open your mouth and drop your voice?

I hear it sometimes from people, that how is that big voice coming from a small woman. I usually answer that it actually has nothing to do with body`s size, but what helps is a pair of big lungs and well trained vocal cords :)

What were your main musical influences at the beginning of your career, and what are the influences now?

Your style of dressing and wearing your hair is very urban and contemporary, which do you prefer to change more radically? The color or style of the hair?

I have tried out many different styles and colors through out the years. One of my favourite looks is definitely my "Marilyn Monroe" era in 2016-17 when I rocked a short blonde bob that I would curl most of the time. That was a look! Right now for the first time in over 10 years, I`m growing my hair out naturally, and I`m enjoying the process very much!

You write your songs. Are they always about personal experiences or do you also talk about different subjects and other people's experiences?

I always write my songs about my own life experiences the good and the bad. Some songs might be about a friend, or a family member, but still from my point of view.

Choose a song from each of your solo albums to represent you right now. What is the reason for choosing?

1st album: Pretty Messed Up. This song is my favourite from the first album. Fun Fact: I actually wanted to name the album "Pretty Messed Up" but my record label thought it was not a good idea, so I decided not to name the album at all, ha!
It`s a break up song so all parts of the songs don`t represent where I am right now, but my message is still the same: I might be bit messed up sometimes, but I`ll never apologize for being myself!

Favourite line: "I know you will understand though it will take some time
I just had to do things my way for that I`ll never apologize"

2nd album: All Good. My favourite from the 2nd album. I`m in a very good place in life right now, in personal life as in my career.
I have big plans for the future and sometimes I get frustrated when I feel that things are not moving fast enough. This song always helps me to get my feet back on the ground and remember to be grateful for everything I already have.

Favourite line: "Ain`t got no money, guess I`m still kinda poor,
but I feel richer, than ever before"

Your self titled solo debut was a huge hit on Spotify, turning up to soap opera theme in Brazil (NYWMB), did you expect all this repercussion?

It was so crazy when I found out about it! I was wondering why there was so many Brazilian comments on my youtube page. Then later on an interviewer asked me how I got my song played on Brazilian Soap Opera and I was like "What? What Soap Opera". It`s crazy how a happening like that can open up a whole new connection to a country I never thought anyone would listen to my music! We are now working on a tour in Brazil, hopefully for 2020!

Not to mention the grandeur of the melodies and the way you use your voice as if you were born for it (which is a big fact). Tell me everything you felt when you wrote and recorded Ina Forsman.

During the songwriting, I went through my first real break up after a long relationship, so most of the songs are reflections of my true feelings of that whole process. "No Room For Love" "Now You Want Me Back" "Pretty Messed Up" and "Devil May Dance Tonight" are songs where I sing about that relationship and the end of it. Most of the songs though, I wrote some time after the actual break up, so I already had time to get over and try to find love again, or at least some fun company. "Bubbly Kisses" "Before You Go Home" "Don`t Hurt Me Now" are from that time.  All those "Relationships" turned out to go bad quickly as well, which felt bad at the time but hey, at least I got some good songs written!

Let's talk about your new, extraordinary, wonderful and totally lifesaving album, BEEN MEANING TO TELL YOU. I'm curious, why choose this title? What is the concept behind your album?

I wrote "Been Meaning To Tell You" for three years after my first album. Name is a line from the song "All Good", but I didn`t wanna name the album "All Good", since that would`ve sounded too happy. I wanted to challenge myself while writing the songs. I wanted to write songs about something else than love and relationships, I wanted to dig a little deeper. I wrote two songs about sexual harrassment towards women, "Whatcha Gonna Do" from mens point of view, and "Why You Gotta Be That Way" from womens. I also wrote a song about domestic violence "Miss Mistreated". These are some areas I haven`t gone before with music, but I felt the need to go there this time. Talking about political issues in music is always a risk, since most of the listeners want to me entertained not lectured when listening to music, but I felt that for my own personal growth as a performer and a songwriter, it was necessary to do that. Of course I ended up writing some love songs as well, like "Genius", "Be My Home" and "Figure", and one of my favourites on the album "Every Single Beat", that`s my Ode to music and performing.

All Good is their first single and flagship of the second album and both the music and the video bring us a breath of peace and fresh breeze. How was the choice of the single and the concept behind your video?

I had a very clear vision for the music video, I wanted it to be chill and positive like the song. I also knew right away that "All Good" is gonna be the 1st single when I wrote the song.
I wanted to "get back to business" with a positive song about self love and appreciation. I felt that the world we live in could use a song like that right now.

Be my home, Sunny, Figure and Who Hurt You Now caught my attention for the impressive quality of the lyrics (just like every album), What is your motivation for writing them? What is the story behind?

"Be My Home" like the first line says "I`d like to dadicate this song for the ones that I love". I wanted to write a song for my friends and family who always have my back and who always continue to support and love me.

"Sunny" I wrote for my sister Sani, She was 14 at the time when I wrote her that song. I recorded the first version myself while playing ukulele and sent it to her when she was about to take her first trip alone to UK as an exchange student.

"Figure" is my most honest love song to date. I was in a very difficult relationship, and after one of our usual fights I wrote the song in our livingroom when he was at work. When I was in Austin recording the album, we we`re having another fight via text messages when I was singing "Figure" in the singing booth, you can almost hear me cry on some parts. It was very stressfull then, but now I think it`s bit funny how I wrote a song about fighting, and I actually end up fighting during the recording. The relationship was shit, but it taught me some very valuable lessons about love and relationships.

"Who Hurt You" I wrote for a dear friend of mine who I love deeply. She is battling with traumas and addiction. It`s hard to see someone you love suffer, but what`s even harder, is to see that person try to heal herself with all the wrong things, alcohol for example. You can`t fix anyone who doesn`t want to be fixed, but when their self sabotage is starting to effect other peoples lifes too, It`s time to do something. I wrote this song to her as a friendly reminder, that I`ll be here for her no matter what, but I can`t save her from herself. She has told me that she absolutely hates the song actually, which we both laugh about. I understand her, I mean, would you like a song where someone tells you to "get your shit togethe?"
She is doing bit better nowadays, so if this song put her into the direction of healing even just a little bit, that means it was worth it.

Sunny a capella. What can I say or ask? It has reached perfection. Thank you so much for this and for both albums. I was introduced to you through an acquaintance (Gabriel) at a time when everything was falling apart for me. You were one of the reasons along with your music to give me strength and keep fighting. I just have to thank from the bottom of my heart.

Thank you so much for your kind words, and great intriguing questions! My answers ended up being pretty long, feel free to shorten them for your post :) (Editor's note: I would never take a word off, I loved the interview)

Check us out on Spotify HERE