[ENG] Top 10 álbuns by the Goddess Luana Caraffa - From Belladona 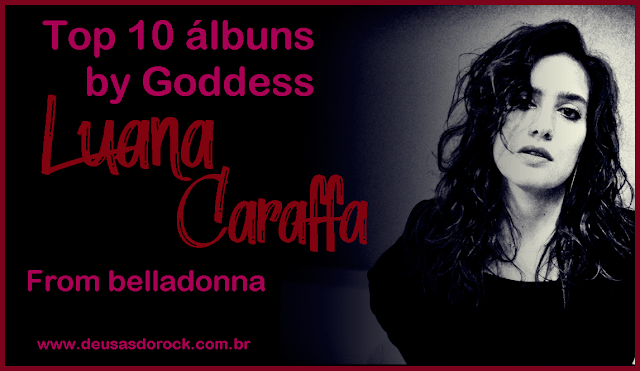 When I was a teenager, this album managed to bring me into an unspecified past, perhaps in places of the mind that seem to remain unchanged over time. Even now, when I listen to it, I feel I'm there - even though I don't know exactly where.

Pink Floyd - The Dark Side Of The Moon
It is simply a masterpiece. And today it is even more impressive to think about how these songs reached people without any need to rely on the musicians' image. It was a time when music did the talking and people could connect with it without needing anything else.

Anthony and the Johnsons - I Am A Bird Now
When this album came out I thought a miracle had happened. I can't find a better adjective than "sublime" to describe each of its songs.

Marilyn Manson - Mechanical Animals
A glamorous and decadent album, with lyrics that put you in a dystopian scenario where the revolution is a scream made of plastic and you have no escape.

Suzanne Vega - Solitude Standing
A cross between minimalism and storytelling where the everyday becomes a theater without spotlights... a kind of visionary realism that knows how to get you into the nexus of a story without slamming it in your face.

David Bowie - Hunky Dory
It's an album that you can talk about for hours only to then discover you still haven't been able to describe its beauty.

Fleetwood Mac - Rumours
People are divided into two categories: those who think that "Rumours" is a major work of stratospheric beauty and those that think otherwise. People in the second category are 100% wrong!

Bruce Springsteen - Born In the USA
It's a fantastic album with songs that can talk to each of us and enhance our best side.

Queen - A Night At The Opera
We often talk about the voice and the charisma of Freddie Mercury as if this force of nature was the key element of Queen, but we dwell little on the majesty, on the grandeur of their melodies that are among the most beautiful ever conceived. This album is a precious pearl and an example of how true artists do what they want regardless of what others think (including radio and record companies)

Kate Bush - Hounds Of Love
I could describe it as the fusion of Art Rock and Progressive Pop as many do, but for me it is simply a unique work of Art, the work of a genius.